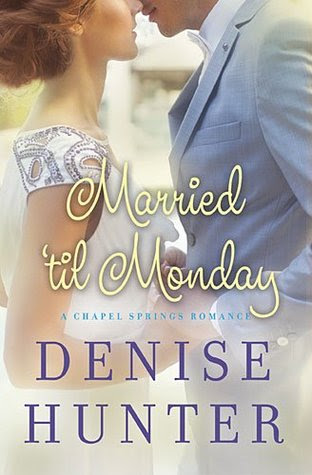 ABOUT THE BOOK -
With a big anniversary party in the works for his ex-wife’s parents, Ryan has just one weekend to play Abby’s husband . . . and win back the woman of his dreams.

Ryan McKinley has tried to move on from his ex-wife, Abby. He’s sulked, he’s gotten angry, and ultimately he bought her dream house. Big mistake. Living alone in the massive two-story has only made him miss her more. When her parents call him out of the blue about their anniversary party in Summer Harbor, Maine, Ryan believes God has dropped a golden opportunity straight in his lap.

Then Ryan shows up on her doorstep, looking as handsome as ever. When he insists he’s going to Summer Harbor, with or without her, Abby knows she can’t say no. Her parents still think they’re married and now Ryan knows it too. It’s just a one-week road trip with the man who broke her heart. What could possibly go wrong?

Denise Hunter is the internationally published bestselling author of more than 25 books, including "Dancing with Fireflies" and "The Convenient Groom". She has won The Holt Medallion Award, The Carol Award, The Reader's Choice Award, The Foreword Book of the Year Award, and is a RITA finalist.
You can learn more about Denise through her website www.DeniseHunterBooks.com
or by visiting her FaceBook page at https://www.facebook.com/authordenisehunte


MY THOUGHTS -
UGH! I hate doing this. Denise Hunter is one of my favorite "go to" authors. I have loved some of her previous books... But this one was just OK for me!


First, my thoughts on the book -
I didn't get as much of a feel for the characters in this book as I have before and the main character, Abby, was actually kind of annoying to me! I did like Ryan though. But I felt sorry for him that he had to put up with her. I would have given up on her a long time ago. I guess that makes him a better man than I LOL.
The book also seemed to drag a bit for me. It was an OK story, just not one of my favorites.

My thoughts on the narration -
Again, I hate to do this but I hated the reader's voice! It was like nails on a chalkboard to me. It was very whiny. Her voice never changed. She always made the characters sound the same, even Ryan sounded whiny. And I noticed in a couple spots she mispronounced words.

It always makes me wonder what I would have given the book if I had actually read it instead of listened to it. Abby may have been totally different for me.

This book got pretty good reviews, a few 3 star reviews. And I did notice that a couple other people did not like Abby! So, whew, I was not alone.

I got this book with my free credit from Audible.

Order your copy from Amazon - HERE
Posted by Wall-to-wall books at 11:45 AM