I grew up in New York City. At the moment, I live in Connecticut with my family. 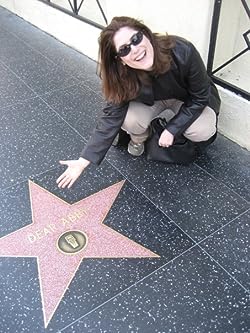 Thanks for having me on your blog! I’m thrilled to be here.

How did you choose your characters? Did you model them after someone you knew?

I took bits and pieces of real people and fictional characters I’ve loved. Then I added my own special sauce and mashed it all up into an original character. There’s a bit of me – sometimes more than a bit – in every character in Clean Break. Then you’ve got personality traits, quirks, and speech patterns – these come from people I’ve known personally or professionally, or even random people I’ve come across in daily life. One of the best parts of being a writer is that all experiences, even negative ones, are a gold mine of inspiration.

For Lane, I was drawing a little bit on Emily Blunt’s performance in a movie called Sunshine Cleaning. She had the edgy look and the wounded attitude that I imagined for Lane, and also sort of a quiet yet fierce bravery. Even when she screwed up colossally in that movie (and she did), I found myself rooting for her.

Mrs. Pasternak was a minor character, but I had so much fun writing her dialogue. With her, it was all about Kate Mulgrew playing “Red” on Orange is the New Black – not so much looks-wise, but the accent and the attitude. For Viktor and Detective Jarrett, I was inspired by a few fictional characters, but to name them here would be very spoilery, so I’ll direct readers to my author website for further discussion – after they’ve read the book!

How did you decide if the characters were going to be good or bad?

That’s a great question! The most interesting characters tend to be both good and bad, and maybe that’s a cop-out – but I like it when good people make bad choices. Behind every action is a positive intention, even when you’re doing incredibly self-destructive things. In Clean Break I was focusing not just on Lane’s decisions – good and bad ones – but also the decisions of everyone around her. These characters were usually doing the best they could with what they had, but like all of us, they struggled – with demons, with blind spots. Inevitably their weakest, most vulnerable areas will get stressed, perhaps to the point of failure. And all of that becomes doubly interesting when the characters are forced to interact with each other.

I went from hating Cynthia in the beginning to loving her at the end, how did you do that? Did you plan that or did she just kind of developed as the story went along? - I will explain this more in my review tomorrow.

Cynthia was so much fun to write. She was one of the last characters to gel properly in my mind. When I first sketched her out, she was a lot more perfect, and far less interesting – sort of like a “spoiled rich lady” from Central Casting. I was actually having trouble writing her scenes because she was so one-dimensional. Then it occurred to me that no one is that perfect. And that was a light-bulb “Eureka!” moment, because Cynthia ends up being even needier than Lane in a non-financial capacity. Her situation is different, but just like Lane she’s reaching a crisis-point in her life…and because she’s forced to confront that, she’s finally seeing what she’s really made of.

And Viktor... Oh my word! Please tell us about him!

Well, Viktor is definitely a classic “bad boy” who’s all wrong on paper, but one look at him and you’re done. Common sense goes straight out the window. It’s a bit of a twist on the old reliable Beauty and the Beast trope, because Viktor starts out good-looking and stays that way.

I really wanted Viktor to play against type – it’s intriguing when the bad guy does a good turn. What’s his motivation? He’s a complex character, not just eye candy (in my head, he looks an awful lot like Richard Armitage.) Like everyone else in this story, Viktor’s got baggage – he’s fighting his way out of a dark place. There’s a mutual seduction between him and Lane that unfolds rather slowly by romance novel standards. I really enjoyed writing it.


This really did start out as a guest post but after reading the book (which I LOVED) I had so many questions about the characters. So this kind of ended up more of an interview.

I want to thank Abby for coming on my blog! What fun! After emailing back and forth a few times (well, more than a few) we found out we have a lot in common. Besides being a great writer - she is such a nice person! I love it when you connect with an author like that. I turns them in to a real person not just a name on a book. Now I will think of this interview and our emails when I read her future books.


Please some back tomorrow to read my
5 star review of
Clean Break!