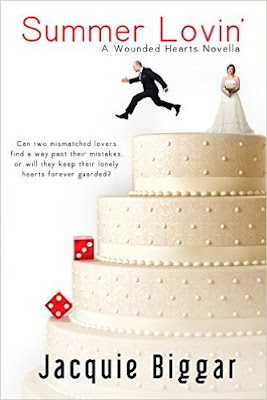 Rebecca’s job as secretary of Cascade Elementary, the same school she attended as a child, is rewarding. She has a great group of friends, many of whom are married now. And if sometimes she wished it were her up there in that sparkling white dress…

Except, wait—she did get to wear bridal white. Granted, it was a slinky party dress and the justice of the peace was Elvis in a gold lame jacket, but still, the deed was done.

Mitch Taylor doesn’t do regrets. It would be a waste of energy bemoaning the mistakes he’d made in his life. The end of his promising football career taught him nothing in life was a guarantee.

What were the chances two people from the same po-dunk town in Washington would end up together in a nightclub in Las Vegas? A few too many drinks later, a hasty ceremony performed by the king of rock ‘n’ roll, and they’d been hitched. The night that followed lived on in his dreams, but when he’d woken the next morning she was gone.

Can these two mismatched lovers find a way past their mistakes, or will they keep their lonely hearts forever guarded?

Mitch’s gaze zeroed in on her lips and darkened. “You and me—later. I’m tired of waiting. It’s time we settled our past so we can move forward with our lives.” He leaned in and gave her a quick, hard kiss, their breath co-mingling and tasting of the coffee he’d stopped and bought for her.

Rebecca sighed and gave herself up to the moment, though in the back of her mind his words nipped and stung, warning her that it was going to hurt when he left. How did this happen? When did Mitch Taylor become necessary to her happiness?

God. She was in love with him.

Her mouth slackened. Mitch sat back and looked at her quizzically for a moment, then he turned away to help young Jasper, and she tried to pay attention, she really did. But, all the time he was asking Tommy what happened, and running gentle fingers over the injury, and she was smiling and murmuring reassurance, her heart was breaking into a million tiny pieces. 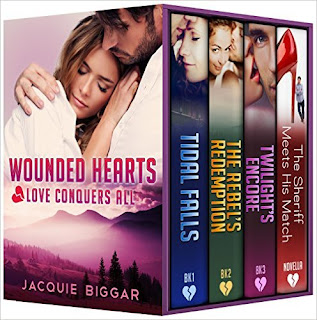 I live in paradise along the west coast of Canada with my family and love reading, writing, and flower gardening. Oh, and I can't function without coffee! Preferably at the beach with my sweetheart. :)

I write Romantic Suspense with tough, alpha males who know what they want until they're gob-smacked by heroines who are strong, contemporary women willing to show them what they really need is love.

I've been blessed with a long, happy marriage and enjoy writing romance novels that end with happy-ever-afters.


MY THOUGHTS -
This was a cute, fun book with some suspense and heartfelt moments in it. I really liked the ending, it had one of those endings - It ended just the way I wanted!
I liked the characters, Becky and Mitch. And it definitely had a great story line...

My only two problems were - it was too short for all that was happening. This would have made a much better full length novel. It felt way too rushed and confusing. Which brings me to point 2 - Way too many characters to keep track of for a novella. Now, I know this is part of a series, which is probably why all the characters (so they could be introduced for the next ones coming out).

It was worth the read! I did like it, but I would have liked it much better if is was a full length book.

Thank you Magic of Books Promotions for sending me this book for my honest review!