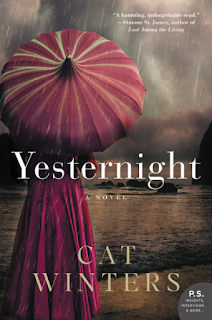 ABOUT THE BOOK -
In 1925, Alice Lind steps off a train in the rain-soaked coastal hamlet of Gordon Bay, Oregon. There, she expects to do nothing more difficult than administer IQ tests to a group of rural schoolchildren. A trained psychologist, Alice believes mysteries of the mind can be unlocked scientifically, but now her views are about to be challenged by one curious child.

Seven-year-old Janie O’Daire is a mathematical genius, which is surprising. But what is disturbing are the stories she tells: that her name was once Violet, she grew up in Kansas decades earlier, and she drowned at age nineteen. Alice delves into these stories, at first believing they’re no more than the product of the girl’s vast imagination. But, slowly, Alice comes to the realization that Janie might indeed be telling a strange truth.

Alice knows the investigation may endanger her already shaky professional reputation, and as a woman in a field dominated by men she has no room for mistakes. But she is unprepared for the ways it will illuminate terrifying mysteries within her own past, and in the process, irrevocably change her life.

Cat Winters was born and raised in Southern California, near Disneyland, which may explain her love of haunted mansions, bygone eras, and fantasylands. She received degrees in drama and English from the University of California, Irvine, and formerly worked in publishing.

Her critically acclaimed debut novel, In the Shadow of Blackbirds, was named a 2014 Morris Award Finalist, a School Library Journal Best Book of 2013, a 2014 Best Fiction for Young Adults pick, and a 2013 Bram Stoker Award Nominee. Her other YA fiction includes The Cure for Dreaming (2015 Amelia Bloomer Project, the 2014 Tiptree Award Longlist, VOYA's 2014 Best Science Fiction, Fantasy, Horror) and The Steep and Thorny Way (a 2016 Junior Library Guild selection). Her first novel for adults, The Uninvited, debuted in 2015, and her second, Yesternight, will release October 4, 2016. Winters was also a contributor to the YA horror anthology Slasher Girls & Monster Boys. She lives in Portland, Oregon, with her husband and two kids.
Author Links: Website, tumblr, Pinterest, Instagram, Facebook, and Twitter

MY THOUGHTS -
This book was incredible! It was fascinating, not what I expected at all. It starts out as a historical fiction about a woman psychologist in 1925, that alone would have been interesting enough for me, but then it turned thriller! I have read many historical fiction books about school teachers but none about psychologists. It turned dark very quickly and certainly kept me on the edge of my seat. It was creepy, kind of scary but fun and interesting all wrapped up together.
And, the ending... wow! Even creepier, if that's possible. I loved the ending.

I can not believe I had not heard of this author before now. I have always loved horror and psychological thrillers. This is just the kind of book I love to read. This takes the thoughts of reincarnation to a whole other level. I will definitely have to explore her other books.

Thank you TLC Book Tours and Harper Collins for sending me this book for my honest review!
Purchase Links:
HarperCollins | Amazon | Barnes & Noble