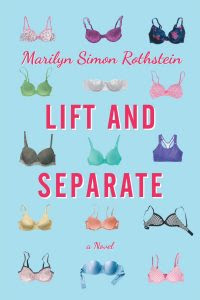 ABOUT THE BOOK -
Marcy Hammer’s life has been turned upside down. Her husband, the head of a global brassiere empire, didn’t think twice about leaving her after thirty-three years of marriage for a 32DD lingerie model. Now Harvey the Home-Wrecker is missing in action, but Marcy’s through thinking about what a cliché he is. What she needs now is a party-size bag of potato chips, a good support system, and a new dress.

Striking out on her own is difficult at first, but Marcy manages to find traces of humor in her heartbreak. Even while devastated by Harvey’s departure, she still has her indomitable spirit and her self-respect. She has no intention of falling apart, either, even when her adult children drop a few bombshells of their own and she discovers a secret about her new, once-in-a-lifetime friend. Life may be full of setbacks, but by lifting herself up by her own lacy straps, Marcy just may be able to handle them all. 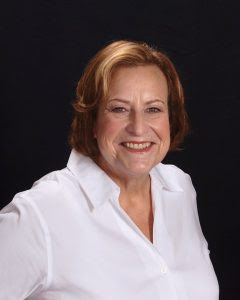 For more than twenty-five years, Marilyn Simon Rothstein owned an advertising agency in Connecticut. She grew up in New York City, earned a degree in journalism from New York University, began her writing career at Seventeen magazine, and married a man she met in an elevator.
Lift And Separate is her debut novel. - (Amazing!)

MY THOUGHTS -
First - this does not read like a debut novel!
This poor woman's life was a train wreck! Just one tragedy after another. I really connected with Marcy, who wouldn't? She is like the epitome of the real life, everyday woman - can you say "Hello, welcome to my life!" This was a very real feeling, funny at times, but also sad and heartbreak story. But wait, there's more! This is also a story about a woman who grew. She went through so many emotions. Her relationship with her mother grew and she found out thing about herself she didn't know. Her strength and independence grew and that was the best part :-) I loved seeing this change in her.

At first I didn't like the way Marcy was handling things.The fact that her husband was cheating on her, and she not only still loved him but... wanted him back??!! Pah lease! If my husband was cheating I would never want him back!...
Oh wait... my husband WAS cheating! And I told him to take a flying leap and take his hussy with him. That's how he became my ex! I am married to a wonderful man now (going on 23 yrs!).

But then Marcy started to grow a pair, UGH I've always hated that expression! Marcy started to get some guts and independence, and then the book got interesting. It was all of the sudden - no more feel sorry for Marcy, but Way to go Marcy! You're my hero!

And on top of all this... her mom gets sick. I love you Marcy girl, I'm there for you!

I voluntarily posted this review after receiving a copy of this book from TLC Book Tours. Thank you!


a Rafflecopter giveaway
Posted by Wall-to-wall books at 8:50 AM