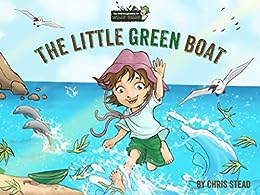 ABOUT THE BOOK -
The everyday activities of Willy Nilly spiral into epic adventures as his wild imagination blends with reality and we see the world through a child’s eyes. In this, his first adventure, a trip to the beach takes an interesting turn when Willy Nilly finds a little green boat. Upon jumping in for a play, a giant wave takes him out to sea. Stranded, he enlists the help of some dolphins, who carry him to a secret island where he finds a treasure map leading to a great prize. If only he can brave the crocodiles, bats, monkeys and other dangers on the way. 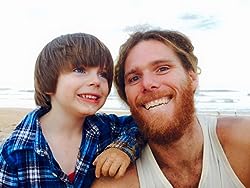 ABOUT THE AUTHOR -
Writing has been a part of Chris Stead’s life since he was very young. In fact, he won the “creative writing” award way back in Year 3 at school as a seven-year-old. During his senior school years, Chris wrote constantly, be it stories while he was sitting at his desk in class not concentrating on the teacher, or writing up news reports on all the sports and experiences the kids in his local neighbourhood enjoyed every day.

Fast forward a little and Chris’ media career could only be described as diverse. Spanning publications and clients as broad as Maxim Men’s Magazine to the University of NSW to Game Informer Australia and Krash Kids Magazine he has spent 20+ years writing and editing across the Australian media industry.

In 2014, Chris launched a new chapter in his writing life. He founded his own company, Old Mate Media, and launched the first of a range of children’s books in The Wild Imagination of Willy Nilly series. Chris’s vision for the company is that other aspiring writers who would like to create their own publications – no matter what the topic – will enlist Old Mate Media to help them turn their dream into a reality.

MY THOUGHTS -
Very cute story! There are fun drawings with bright colors. So a nice book for the kid's eye! The story is fun and adventurous enough to keep them wanting to listen (or read themselves). There's lots to look at and talk about on each page.

The version I have is the e-book version with interactions. But... there isn't really that much interaction. There are a few background sounds and when you hit the Floaty the words to the story appear. I would have liked to see a lot more. If you are going to go the extra and do an e-book with sound you should make it count! I kept touching other things to see if anything would happen so that was a little disappointing. That is the only reason for the 4 stars other than that it would have gotten 5!

But - all that aside - the book is very cute and very kid friendly. So definitely worth the buy. but I would go ahead and just buy the print version.


I voluntarily posted this review after receiving a copy of this book from Kate Tilton's Author Services & Old Mate Media -  Thank You!

Order your copy from Amazon- HERE