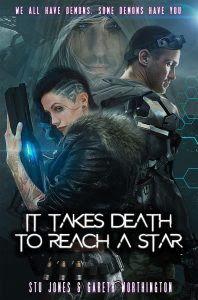 ABOUT THE BOOK -
THE WORLD YOU KNOW IS DEAD.

WE DID THIS TO OURSELVES.

The epidemic struck at the end of the Third World War. Fighting over oil, power, and religion, governments ignored the rise of an anti-bacterial-resistant plague. In just five years, the Earth was
annihilated. Only one city survived—Etyom—a frozen hell-hole in northern Siberia, still engulfed in conflict.

Two groups emerged from the ashes of the old world. Within the walled city of Lower Etyom, dwell the Robusts—descendants of the poor who were immune to The New Black Death. Above them, in a metropolis of pristine platforms called Lillipads, live the Graciles—the progeny of the super-rich; bio-engineered to resist the plague.

Mila Solokoff is a Robust who trades information in a world where knowing too much can get you killed. Caught in a deal-gone-bad, she’s forced to take a high-risk job for a clandestine organization hell-bent on revolution.

Demitri Stasevich is a Gracile with a dark secret—a sickness that, if discovered, will surely get him Ax’d. His only relief is an illegal narcotic produced by the Robusts, and his only means of obtaining it is a journey to the arctic hell far below New Etyom.

Thrust together in the midst of a sinister plot that threatens all life above and below the cloud line, Mila and Demitri must master their demons and make a choice—one that will either salvage what’s left of the human race, or doom it to extinction…

Gareth Worthington BSc PhD is a trained marine biologist and also holds a doctorate in comparative endocrinology. Currently, Gareth works full time for the pharmaceutical industry helping to educate the world’s doctors on new cancer therapies. His debut novel, Children of the Fifth Sun, won in the Science Fiction category at the London Book Festival 2017. He has a number of passions, including: martial arts (he trained in Muay Thai at the prestigious EVOLVE MMA gym in Singapore), studying ancient history, and most of all writing fiction. Born in England, Gareth resides in Switzerland.

Stu Jones has served full time as a law enforcement officer for twelve years. Over the course of his career he has worked as an investigator, an instructor teaching SWAT close quarters and defensive tactics, and as a member and team leader of a multi-jurisdictional SWAT team. He is also trained and qualified as a law enforcement SWAT sniper, as well as in hostage rescue and high-risk entry tactics. He is an Eagle Scout, a lifelong martial artist, and an avid outdoorsman.


MY THOUGHTS -
Fantastic! The post-apocalyptic genre is one of my favorites. Normally I don't go for stories quite so sci-fi or fantasy. But lately… I am really liking the ones that I have read. And this one was just excellent. I felt it was very well written. There was such attention to detail.

I really loved the characters, Mila and Demitri. Both so different and from totally different backgrounds in a new world where there is a caste system putting Demitri on the top and Mila on the bottom . But they soon meet and work together so wonderfully. I have to say, being a woman, Mila was my favorite character! She was this strong, smart, take no crap, kickass heroine. But I also love that she had her morals and a touch of heart as well that is what made me fall in love with her! Demitri on the other hand, was quiet, a bit shy, not the fighting type, but super intelligent… a computer geek, and the whole while thinking he had schizophrenia.  And again you can't help but fall in love with him.

You get a lot of action in this book. It is all very well done, very easily visualized. The more I read the more I wanted to read. The last half of the book I sat eyes glued to the page.

This is my first one by either of these authors but it made me go and do a search for other books that they have written, wanting more.

I voluntarily posted this review after receiving a copy of this book from TLC Book tours ~ Thank You!
Order your copy from amazon - HERE