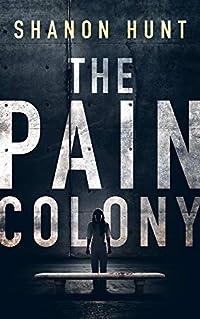 ABOUT THE BOOK (Audio) -
Six dead bodies with one disturbing similarity. An illicit genetic experiment. A secret society of true believers willing to do whatever it takes to become Pure.

And this is only the beginning.

DEA Special Agent Peter Malloy is no stranger to the devastating impact of drugs. So when six bodies turn up with surgical ports implanted in their spines, he's sure a potent new opioid is the culprit. But when lab tests show zero evidence of any known narcotics, he fears something far more sinister.

Allison Stevens thought she knew everything about her boss. But after he disappears, she's stunned to discover his secret genetic research in pain tolerance. When she becomes the target of the FBI's investigation, Allison has only one move. She must expose his illegal experiment. There's just one problem. Some secrets will be protected at any cost.

As Malloy and Allison get closer to the truth, they begin to realize they're about to uncover the most chilling medical discovery in human history.

If it doesn't get them killed.

The Pain Colony is a gripping suspense thriller--you'll be plunged into terrifying twists of modern science, chilling tension, and shocking revelations that will leave you breathless.

"A nail-biting page-turner you can't put down!" --BookTrib
"A shocking finale that even jaded readers won't see coming!" --BookLife


ABOUT THE AUTHOR and NARRATORS -
Shanon Hunt - As a former pharmaceutical executive of 15 years, Shanon Hunt has firsthand experience with cutting edge medical advances. But it wasn't until she took an interest in CRISPR and the near future implications of genetic engineering that she became inspired to write a suspense thriller.

When she's not plotting her next story, she enjoys being tormented by her frisbee-obsessed Australian Shepherd, hiking the wilds of northern New Jersey, and canyoneering in southern Utah with her husband, Steve. She lives in suburban New Jersey with Steve and their two teenage sons, Nick and Ben.


Erin deWard is an Audie Award winning audiobook narrator and a classically trained stage actor. She is a long-time company member of The Strange Bedfellows, a Rockland County, NY based Shakespeare company and can be found directing, assisting another director, or on the lighting board for The Children’s Shakespeare Theatre in Rockland County, NY. She also directs English Language dubbing for IDC in New York. Erin has been working in the field of Audio Description (media accessibility for people who are blind) as a writer, voice talent, advocate, and trainer for over a decade. She is a proud and grateful member of SAG/AFTRA.


Noah Michael Levine - Family lore has it that, when I was three years old, my parents took my two older brothers and me on a vacation to Puerto Rico.  At some point during the sojourn, my parents ... well ... they lost me on the beach.  After searching, frantically, (Or not, as the case may be.  I mean, they DID lose me in the first place.) they found me in the hotel bar, sitting on a hooker's lap, telling a story to a sailor.  And THAT is when my life in performance & yarn-spinning began.

The rest of my life has pretty much followed suit.  Telling stories and becoming characters.  I have over 40 years experience as a stage, film/TV actor and  singer/songwriter/musician.  And now, with over 325 audiobook titles, I'm so passionate about this industry - a medium that allows me to be immersed, for hours and hours, in wonderful characters and their tales.  I'm grateful for the authors, narrators, & productions companies with which I work and so thankful for all the listeners!


MY THOUGHTS -
Oh my gosh! This book was fantastic! I loved every second of it. It was strange, quirky, original, and oh so suspenseful! By the time I got to the end I was saying - "Are you kidding me!?!?!"
I can't wait to read the next one in the series - With Pain Comes Peace.

Great character development. I loved Leyla (a young woman who was living in "The Pain Colony") she was so sweet and innocent. You later learn that her innocence was stolen from her :-(
Also Allison I ended up liking very much but did not like her at all in the beginning.

Audio Review - Great! I though both did a fantastic job. I don't always like the narration and it sometimes ruins the book for me. But this one I really liked listening to - Great job all around!

I voluntarily posted this review after receiving a copy of this book from The Audio Bookworm -  Thank You!