THE LIGHTHOUSE WITCHES by C.J. Cooke 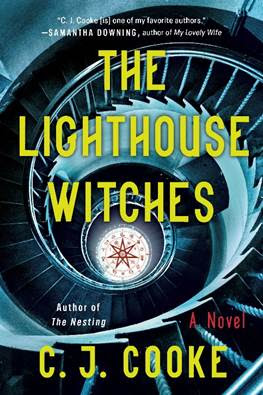 ABOUT THE BOOK -
When single mother Liv is commissioned to paint a mural in a 100-year-old lighthouse on a remote Scottish island, she thinks it’s an opportunity to start over with her three daughters Luna, Sapphire, and Clover. When Sapphire and Clover go missing, she's frantic. She learns that the cave beneath the lighthouse was once a prison for women accused of witchcraft. The locals warn her about wildlings, supernatural beings who mimic human children, created by witches for revenge.

Twenty-two years later, Luna has been searching for her missing sisters. When she receives a call that Clover has been found, she's initially ecstatic. However, she’s still seven years old, the age she was when she vanished. Luna is worried Clover is a wildling. Luna has few memories of her time on the island, but she’ll have to return to find the truth of what happened to her family. But she doesn't realize just how much the truth will change her.

Drawing on history, Cooke drew inspiration for THE LIGHTOUSE WITCHES from the little-known history of Scotland’s witch trials. Cooke said in an interview with Crime by the Book that “there was a witch trial 20 minutes from my home and there’s barely any commemoration for the women who were murdered. Four thousand people–mostly women–tortured and murdered, their names and memories tainted forever…It fascinates and disturbs me, because four hundred years later we still use the term ‘witch’ to slander women.”

ABOUT THE AUTHOR -
C J Cooke (Carolyn Jess-Cooke) lives in Glasgow with her husband and four children. C J Cooke's works have been published in 23 languages and have won many awards. She holds a PhD in Literature from the Queen's University of Belfast and is currently Senior Lecturer in Creative Writing at the University of Glasgow, where she researches creative writing interventions for mental health. Two of her books are currently optioned for film.
Visit the author's site -  www.cjcookeauthor.com
MY THGOUGHTS -
This book blew me away. It started out good then just kept getting better and better. Lighthouses, witches, missing people, time lapses, this story offers so much that make a fun and very interesting read. This book could have been confusing if it hadn't been done so well, but the author does an excellent job with all the details and weaving them together.
The chapters switch time periods and who the main character is but it is clearly labeled and I love that. It makes it so easy to follow. I have to admit I am sometimes easily confused by multiple POV and time periods in a book but I was not confused once in this one!
There is so much happening, never a dull moment, edge-of-your-seat writing in every chapter. It played out flawlessly right up to the end - which I loved. A very nice ending. Not a big bang ending, but everything wrapped up nicely and explained perfectly.
I wasn't overly attached to any one character, except maybe Luna (one of the sisters) in the present time. But I did "like" all of the characters and thought they were done very well and believable.
I can't believe I haven't heard of this author before. I am going right now and putting her other books on my wish list.
A must read if you are a fan of paranormal stories, lighthouses, time travel, or the witch trials.
I voluntarily posted this review after receiving a copy of this book from Penguin Random House -  Thank You!